The original model for Gollum 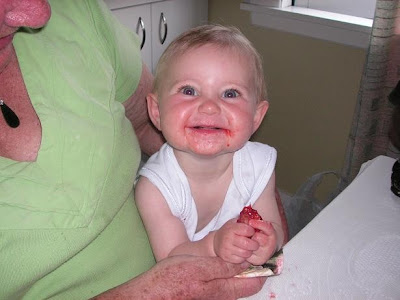 I took it to VTNZ. Don't do that! They get paid per fault found, I reckon. They are uber-picky!!! They said my car needed:

I said "bugger that" and took it to the lovely boys at Moonshine Autos, near UHC.
They said my car needed:

They also said, "Your tyre is borderline, but passes ok. And where's the rust supposed to be? I didn't find any."

Funny how the different places pick up different stuff. I guess the headlight bulb blew in the week between WoFs, but the other stuff? What the hey - as long as I only have to spend about $150 rather than about $600 to get it roadworthy. Then I can sell the bastard :) It was totally worth the second opinion (and extra $40) to save $450. Especially as I am now a HOMEOWNER and don't have a lot of spare moolah.

Psst! Anyone wanna buy a Barina? One careful lady owner (and probably a few not-so-careful owners before that). :)

Here it is folks, the event you have been
waiting your whole life for… (or not)
Fish and Sam’s HOUSEWARMING!!

A not to be repeated event.
Mainly because moving house is a bitch
and we don’t want to do it again for at least ten years!

Saturday 27 January, from about 7ish
We will put on some snacks.
BYO drinks

Short notice, I know, and the races are on at Trentham that day, for those who are into that sort of thing, but we’re sure you can find time to pop in and christen the place. No, not like that. Shame on you, dirty people.

If you’ve read this, consider yourself invited!
Except that guy in the spare room at his Mum’s house reading this in his underpants. He’s not invited. You know who you are.

email fish@paradise.net.nz if you need the address.
at 8:32 pm 4 comments:

As promised on HP's blog, here's a photo of the haircut my sister Carol gave me at age 2. She was four. I can't find the front on view - it disappeared around the time of my 21st. The side view shows the complete lack of fringe and styley shaved side look though. 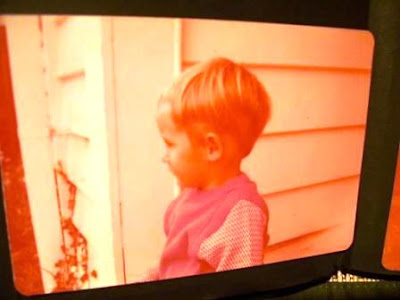 The second photo was taken three months later. You can still see the massive chunk missing at the front. Doesn't Carol look the picture of innocence? Yeah right :) Gotta also love the dressing the kids alike thing my Mum had going there. Nice beads too. 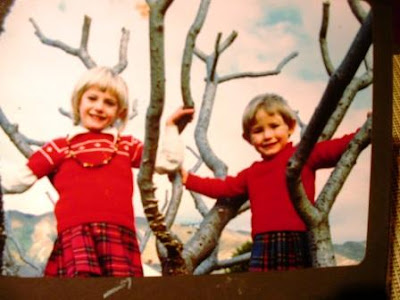 damn them all to hell

So I've switched to the new blogger. Maybe I had already but not realised it - I dunno. All I know is I couldn't log in anymore, so I tried logging in the new one and voila! Here I am.

We now have broadband at home. Yay! And two months free to get me addicted to all sorts of stuff so when I have to pay for it I will, cos I'll be addicted.

Textbook Rant
I went to school on Monday and spent FIVE solid hours stocktaking all the textbooks so I can figure out which naughty students haven't returned their books. I am the self-appointed textbook Nazi this year due to my amazing ability to be super organised. It really bugs me that some other teachers that issue the books don't take any responsibility for them. Some didn't even bother to record which student got which book. This of course wouldn't be a problem if all the kids brought them back, but kids are kids and are going to lose them/leave them at a mates place/leave them in a locker somewhere/change schools and all that kind of stuff. We have something like 100 textbooks missing over the five year levels. And that comes out of OUR maths budget. Hopefully the maths staff might get the connection this year when I make them personally ring all their last years' students to get the books back. Hehehe.

Food Poisoning Stinks (Literally. Euuuwww!)
I still have remnants of Campylobacter in me. Unfortunately my 2kg weight loss was merely water and I am now back to my regular size and weight. Also unfortunately, I still have trouble keeping food in my system any longer than about 2 hours. And therefore small meals are good. drinking water is good. Eating lots of meat or fibre is bad. Incidentally I found these cool stuffed toys thanks D3VO! that are representative of the micro-organisms that cause diseases and other illnesses. Pity they didn't have a Campy. I would have liked one so I could turn it into a voodoo doll.

Bzzzzzzzz
I bought an electric toothbrush. It's awesome. I can nearly manage to do all the surfaces before the 2 minute timer runs out - two minutes is actually quite a long time! I am going to get very good at estimating 2 minute intervals I guess. I went to the dentist yesterday and he said that my teeth looked very good and he was pleased that I had an electric toothbrush and soon I would notice how much better it was than a regular brush. I'm way ahead of him - I noticed by the second day that my teeth felt cleaner than usual and I had much nicer morning breath. That's gotta be good.

Labels
Why do I want to use labels? I've managed so far without them. Comments anyone?
at 11:08 am 6 comments:

Telstra have screwed up AGAIN and completely cut our access to paradise.net Grrr. We have no dialup, no way to check email, and no email anywhere, even when I go from Mum's cos they won't accept my password. Stupidheads. I am going to call them when I get home and give them a piece of my mind. A grumpy piece at that. Good thing I drove Sam to work so I could pop into my work and use the internet. It's wierd being in a completely empty school. Nobody here but the caretakers and the guys building the new chem storage block. All too soon it will be all go again.

I just spent the weekend with a paritcularly nasty tummy bug. The doctor said it was Campylobacter, a common bug in "bbq season" :) I still don't know what caused it though, as I was the only person who got sick that I know of. Incubation takes anything from 1 - 10 days, so it could have been anything. Without being too graphic, I had bloating, cramps, and a speedy case of the runs for at least 3 days. I'm not quite back on a normal diet yet - sticking mostly to bread and fruit and other bland stuff. And I'm not allowed to swim till Friday! I did Monday's lessons from the side which was ok but not ideal. They managed to find a replacement for me for the next three days, but I'm looking forward to being able to get in the pool on Friday.

Won netball last night 35-18. Awesome. I shot 2 quarters and was super-confident for some reason and managed to sink quite a few. With Scott and Aaron we put on about 20 points in the two quarters. It was a good team game all round though - I think we had all missed playing over Christmas and were ready to give it our best last night. I think the other team could have done much better than they did - it should have been a much closer score.

Moving house has disrupted my blogging of late, but never fear, I am back! And I have a lot of free time, not having to go to work till Feburary. One of the perks of teaching. Or perhaps the only perk :) Actually I have to be there on about the 28th or something to enrol the Senior students who failed lots of exams and now can't do the subjects they chose back in October. It would be much easier if they would damn well pass their exams, but I know they aren't all geniusses/genii? Whatever. Obviously I'm not one either.

Mum's clan are all in town for Auntie Wendy's 60th birthday party. There has already been one row (about how the scallops are to be cooked, for Chrissakes!! I mean who cares?) and I am sure there will be more. Imagine three older versions of me, all trying to be the boss at once, and you might get the idea. The three sisters in Mum's generation get all stressed out and yell and get shitty with each other and we cousins and the menfolk just roll our eyes and try to make peace. Family - can't live with 'em, can't kill 'em. At least I get to see Megan. She's all worth it :)

The last however-long of crap weather almost took its toll today. Sam and I both had a severe case of cabin fever and if today hadn't been lovely outside one of us might have decked the other. Not sure who would have been decked and who would have been the deck-ee, the jury is still out on that one. Either way it wouldn't have been pretty.

My car failed its WOF. Rust in the cross member, whatever that is, and one new tyre needed. Yay, and did I mention I am REALLY poor, having just bought a house and with Christmas debt to boot? Looks like I am going to have to get a taste for 2 minute noodles and tuna for the next 6 months.

I also took Wee Man to the vet. He has a rash on his tail (which antibiotics are gonna fix) and poor movement in his back legs (as a result of being old - not fixable). The conversation with the vet went like this:

fish
Lower Hutt, Wellington, New Zealand
... the continuing adventures of a rather large fish in a small pond...