My Dad is in hospital. I won't go into details about why, but essentially the thing that's wrong with him is really painful and as a result he finds it hard to breathe. (His lungs are already poked from years of smoking, even though he stopped over 20 years ago.) So he's taking only tiny wee breaths and can't get enough oxygen but he's too scared to take big breaths cos it starts him coughing and that hurts and then he gets scared because he can't breathe. Kind of a vicious cycle.

I found this person's blog, thinking my mate Kirsten had finally jumped on the blog-wagon.

Not so, but I'm sure Kimberley is just as lovely as little K. :)

In the continuing chain of five hard questions, these are the ones she has asked me. I will answer them later tonight:

aka Special K said...
Your questions, with love from Special K, are:

1. What's the hardest thing you've ever had to do?
Doing a reading at my Brother's funeral was pretty difficult. I cry at tissue ads, so you can imagine I was a bit of a wreck. Apparently I set everyone else going too.
Also, the confidence course at Linton army camp is a challenge. I sprained my ankle jumping off a 3m high pylon thingy when I was there in 1991, and when I went back in 1994 I couldn't even look at that part of the course without remembering how awful it was. I completed every part of it except my nemesis the 3m pylon in 1994 and I cried almost all the way through. But I *did* it!

2. What song do you sing in the mirror with a hairbrush when you think noone is looking?
Somebody to Love by Queen. I'm not really a hairbrush in the mirror girl; more often I sing it in the car when there's nobody else in the car with me. Then when I pull up at traffic lights, I get wierd looks from the other drivers. I like to do it at karaoke too. It suits my range well.

3. What was the last lie you told?
"You can have your cellphone back at the end of the day". Then I got on the phone to the kid's Mum and said I would give it back on Thursday. Meh, she can break the bad news to him. He shouldn't have been texting in class anyway, and he wouldn't have given it to me if I had told him he had to wait three days...

4. What thing do you regret doing? Or not doing?
When you visit Waitomo caves, they give a big speil about the largest underground room and they say Kiri Te Kanawa sang there one time because of the great acoustics in there. Then they ask if anyone would like to sing something. I've been there twice but I've not been brave enough either time. I would probably sing something Church-y in Latin, to suit the atmosphere. Maybe Mozart's Ave Verum, maybe Bruckner's Locus Iste. The latter piece was the one sung at our Wedding, for those who were there.

5. If you could live anywhere in the world, and not be allowed to go anywhere else in your life, where would it be?
Sunrise Island, Fiji? Naah, I think I would get sick of it eventually. Umm... I think NZ in general suits me pretty well. I've only ever lived in Lower Hutt all my life, so it's hard to compare with other places that I have only visited. I think this one needs some more thinking...
at 3:05 pm 1 comment: 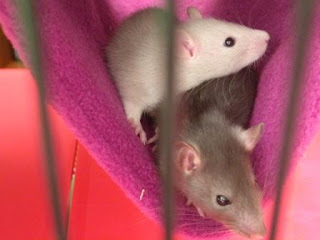 Poppy is the dark one, Lily is the light one.
So cute!! 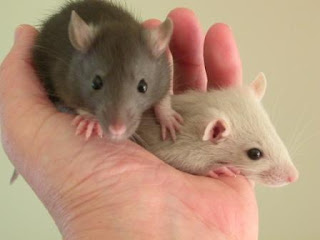 I put this last photo in because it looks (unintentionally) arty. It looks like Lily is about to be mugged by Poppy standing in the shadows. Maybe it's just me. 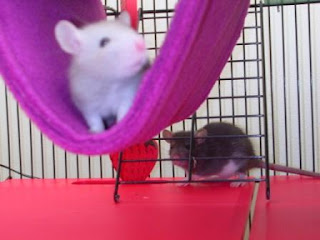 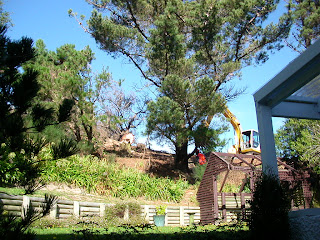 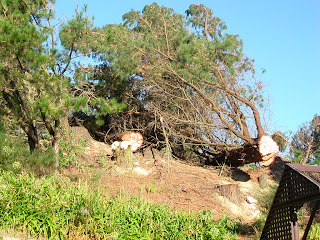 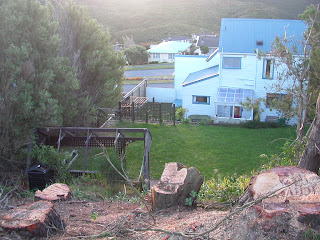 Bye little pine forest!
Turns out all the trees *were* on the school side of the boundary, dammit.
at 8:56 pm 1 comment:

I get them on Saturday.

As not-Kate mentioned in a recent post, I have had a bad run of finger injuries at netball. I now look like a character from the Simpsons with only three fingers and a thumb on each hand. Even if the middle one on each hand is twice as wide and has tape round it.

And I can't do the fingers (not that I would - I'm too well mannered for that), or sign the number two. Like last night when I tried to tell not-Kate that the money was for TWO players.

Still waiting on news about possible baby rats. I cleaned out the cage and set it up all nice for when I get them though :)

There are workmen cutting down trees along our rear boundary. Where there used to be a fence till yesterday. Till they removed it to cut the trees down. On OUR SIDE of the boundary. Wierd that we didn't get notified. Note the two tree stumps marked in yellow and the fencepost (in red). 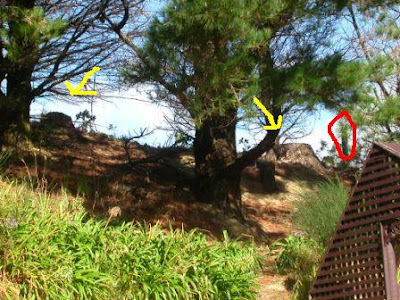 I don't really mind as we get more light, but it would have been nice to know.

Gosh, it HAS been a while, hasn't it?

Visiting family
Sam and his Dad and (nibling) Thomas - and me all travelled to Blenheim for an airshow. 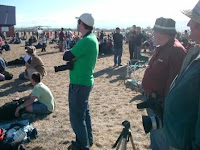 Actually I only tagged along because Carol and Murray live there, but I went to the airshow anyway. Even if I read my book for most of it. 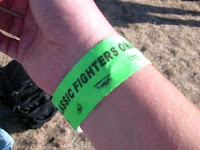 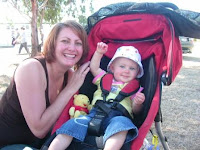 The plane is a Caribou - Canadian in origin, but it belongs to the Aussie Air Force. 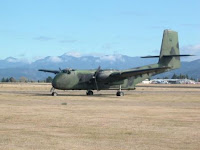 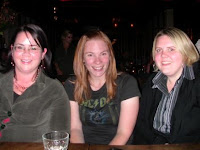 Matterhorn has yummy food, but it is massively overpriced - thank goodness for the Entertainment Book. Did I mention that I am selling the 2007/2008 Entertainment Book to raise funds for my netball club? Only $55. What a bargain - go out for dinner a few times and it's paid for itself! Let me know if you want to get one. I liked Mighty Mighty too - that tall fellow thought we were a bit of allright, eh Kate!
Here are photos of some people that were at dinner: 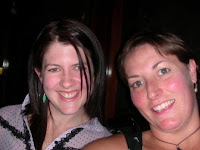 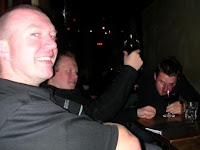 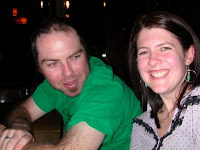 ...and this is a spider that likes hanging round our back porch:

Rat News
I have just joined Rat Club so I can find two baby girls to replace Wee Man. Well, not replace him as such, but you get the idea. There are so many cute photos of all the peoples' rats! If you like that kind of thing...
at 1:21 pm 3 comments:

Yeah! It is officially the end of Term One. Nine weeks of teaching/policing/mothering my students is over for two weeks. Sometimes I do feel more like a policeman/mother rather than a teacher. For example, three students have come to me so far this year to tell me they are (or might be) pregnant. Another 65 or so have had detentions with me, and I've had to chase another 20 or so that didn't go to their detentions. These kids stress me out big time sometimes.

I had a senior teacher come visit my class the other day. I'm struggling with my year 11s. They have a poor work ethic, and some of them have highly developed work avoidance strategies they have been using successfully for years. This class makes me feel like a first year teacher at times - and nothing I try with them seems to help. He has made some really good suggestions and I'm looking forward to getting them back on side next term (hopefully!).

For comparison I asked him to come see my year 10 (favourite) class, and I was really pleased by his feedback. All the things I try with the year 11s (that don't work) DO work in the year 10 class. So I'm not as useless as I thought! I will keep his feedback in my folder and whenever I am having a bad day I will remind myself to look at it.

A quote from his feedback:
"...you are IN CHARGE but still have a WONDERFUL smile! You make their day!"

and another:
"... you work HARD - you get into it with the kids, share your enthusiasm, you're involved, positive and enjoy working with them"

What a lovely way to end the term. I love my year 10s.

I just visited the school library and got some books issued for the school holidays. I intend to do a fair bit of lazing round with a book or three these holidays. One of the perks of being a teacher :) I'll think of you working plebs while I laze round on the couch.
at 3:06 pm 3 comments:

...is a season in the Christian calendar. Most of you lapsed Catholics out there would know what it is, but most people I come across seem not to know much about it. When I tell people that I have given up alcohol for Lent, most people say, "Why - are you pregnant?"

By the way, did you know the 40 hour famine is done in March because it's in Lent and it echoes the "giving something up for Lent" thing? Albeit 40 hours rather than 40 days. Actually, 40 days not counting Sundays, so it's really more like 47 days.

Which brings me to the point of this post. Giving up alcohol for Lent is hard work. Especially when you go to social events at a pub (Wednesday quiz/Friday 3.15pm wind-down...) and everyone else is drinking. And it's not like I'm an alcoholic or anything, but sometimes I would just LOVE a nice cold beer with my fries and conversation. Even if I was driving I would still treat myself with ONE beer.

I have rekindled my affair with spicy tomato juice - my non-alcoholic drink of choice. There is a real art to it - not too much ice, for starters. Then lots of tobasco and Worcester sauce so it's got a lovely bite to it. The more spicy it is the less inclined I am to guzzle it down and need another one. I am also drinking a lot more Coke than I used to, due to it being cheaper than tomato juice.

It's my birthday soon. That is all.

I played in a netball tournament at the weekend. I was supposed to play three games but I pinged my finger (TWICE!) in the second game and had to sit the third one out. It held up ok at indoor last night but I had to tape it just in case.

Can I just mention to all the people who were at the game last night: I did NOT crash into that dopey blond girl on purpose! I was going for THE BALL - as one does in this game. The ref gave the ball to me afterwards so obviously it was not my contact. So there. :P

That girl sure was dopey though. She contacted me every time she went to run into the circle and seemed to have no idea what 'standing down' looked like. I'm looking forward to playing them again later on when they learn the rules a bit better. I think we will still beat them though - as long as we get to the court on time and don't lose 5 points!
at 3:45 pm 5 comments:

fish
Lower Hutt, Wellington, New Zealand
... the continuing adventures of a rather large fish in a small pond...